Big Bertha is known as the first ever electro-mechanical slot machine that was regarded as the world biggest slot machine invented during the 1950’s. According to historic data, the budget used to build this slot machine was more than 150 thousand dollars. The size was six by ten feet and it needed five horsepower engine to make its chain push wheels, measured 21 inches, to work. That machine was bigger than any living man in this world and it required gamblers to pull its spinning lever with their two arms, full forced. However, if you were overwhelmed with the invested money, it was really worth it. Winning at this gambling game were so high that people kept play it and they keep doing that today with modern slot machines. This prototype of modern slots still can be found in Las Vegas but only as a tribute to slot machine development history. 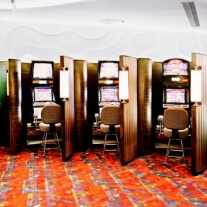 Like the modern slot machines that are used today, Big Bertha also had many reels that held 20 symbols each of them and with those reels with numerous symbols attached, it produced nearly 26 billion combinations. But for that number of combinations, a very very very slim chance to hit a jackpot was provided because only one in that given 26 billion combination could give the jackpot prize, which was only a million of dollars.


So, just using mathematical skills we come to the conclusion that gambler needed to pull the spinning lever to at least 26 billion times in order to find the one combination - one million jackpot. For an ordinary person, even if he could spare 26 billion dollars just to hit the jackpot (paying 1$ for each spin), it was very unreasonable decision to wait for that winning combination.


Going on, to think the possibilities deeply, the Big Bertha would never put you on the winning side. If you were going to win, you must be the luckiest person on Earth. As the biggest and only available jackpot was 1 million, you should only try to pull your luck to hit it as soon as possible.


Well, investing to create slot machines is really worth every penny. As it is a game of luck and has very slim winning odds, it will generate a very great amount of revenue. Even like this above mentioned slot machine that brings a 1/26 billion chance, it was still a big hit and many players tried out their luck playing at this machine.


Since the first slot machine invented in 1895 by Charles Fey, the jackpots were hit not so many times as someone would like to think. It was in 1973 when the biggest recorded jackpot was hit, it was $65, 093 but that was beaten when a woman luckily got the combination of a one million dollar jackpot in Ontario, Canada in 2001. Today there are more players, who were able to hit several million jackpot, but their number is still very tiny comparing to the number of people who play slots. And for a slot machine like the Big Bertha, the miracle must be on your side to pull the jackpot.

We have 8 guests online