How to Play Slot Machines or Pokies Games at Casino? 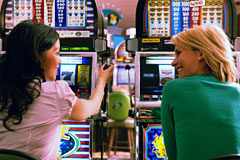 Playing pokies or any other types of slot machine is very simple since these are made to be simple for the convenience of the players. Players only have to insert money in the machine and then follow the instructions and play the game by pressing the buttons. So, how the players can win on slot machines? There are no tricks or strategies which the players have to use in order to win the game. But there are the tips for winning jackpot.

How to Play Pokies

All pokie machines might have some minor differences in their features but the overall way in which the game has to be played remains the same. There would be a coin acceptor or a note acceptor on the machine where you would have to insert the appropriate number of coins in order to activate the game.

Once this is done, you would be given the options of betting on multiple lines. If there are more than single paylines you would also get the chance to select the number of paylines you want to bet on.

After you finish placing the appropriate bets all you have to do is to press the spin button. The reels will start spinning and then come to a halt. The symbols which are displayed at the payline would be the ones which would decide whether you lose or win. In the Australian pubs, the pokies which can be found would have a special button called Reserve feature. This would reserve the machine for the player for 3 minutes. There would also be a Take Win button which would allow you to collect your wins after you have finished playing the games.

Only recommended online casinos have it all for any gambler. Ruby Fortune

Another thing to note is that in the traditional pokies there are no spin buttons. There are specific buttons for the lines per spin and when these are pressed the reels would start spinning. There is also a gamble feature in pokies. The gamble feature is the bet which is a double up bonus. After every win the player can play up to 5 double up rounds. There are two colors to choose, red or black. When these colors are picked, the winnings can be doubled. If the player can get 5 doubles in a row, the winnings would be multiplied 64 times. If the suit is picked it would quadruple the winnings. If the player gets five suits in a row then the initial win would be multiplied by 1024.

In both of these options there are natural odds for the player. What this would mean is that on picking the black or the red bet there is a 50-50 chance while picking the suit will give a 25% proposition. Several pokies might have different types of double ups. The games which are made by the Aristocrat Company have a second set of the reels which have the multipliers listed on them. There would also be he losing symbols printed on these reels.

Playing pokies is not very difficult since there is not much that the player has to do except for placing the bets and hitting the spin button.