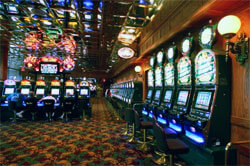 Charles Fey created the first slot machine in the USA. It was rather simple game which became popular very quickly. The game developed along with this slot machine which was known as the Liberty Bell and it was very different from the modern slot machines, though some common features are preserved. Liberty Bell was a three reel machine with five types of symbols, four of them represented suits of cards and one was a Liberty Bell symbol, combination of which guaranteed a win. The mechanism of this game was simple as very soon several resembling machines appeared in different countries. In Australia slots history starts in early 1900's, when the first slot machine appeared there. This game became very popular and very soon it conquered hearts of many Australian gamblers.


In 1953 Aristocrat, an Australian company, noticed that pokies can help them to earn lots of money and they asked Joe Heywood for developing the first official pokies game called the Clubman. Later in 1955 Clubman was replaced by Clubmaster game.


A year after, in 1965, the NSW government legalized gaming machines only for registered clubs. This decision changed the history of gambling in Australia and even at the rest of the world, as previously slot machines could be placed everywhere. Nevertheless, slots have not lost their popularity and people visited special rooms for betting at these machines.


The decades after 1960 were pretty slow with respect to the innovativeness in the field of pokies machines. All pokies had just one, three or otherwise five lines with three reels. Compared to modern standards, jackpots were also small and the interaction of the players was restricted to just pulling the lever and waiting till the reels stop.


The first ever video slots had been introduced to public in mid 1980's. Since the Liberty Bell slot machine, it was the biggest invention in gaming. These video games not only offered 5 reels but also had more number of lines and offered different ways to win bonuses.


Today if you come into any casino you will see banks of video pokies which offer different game options. But video poker machines have not been the ultimate step in game development. Software for playing slots at Internet appeared about two decades ago and it made slot gambling available for all Internet users. Due to the popularity and wide usage of Internet, the online pokies are well known among the gamers, as well as pokies in land casinos. Online gamers are sure that online pokies are the only possible future of gambling because people can play at home comfortably with greater winning chances.


The future of slot machine industry and pokies players looks promising. Lately it has been noticed that bonus games are getting more complex and the number of reels and lines are increasing permanently. The IGT have launched a series of 6-reel and 20-reel games. Pokies will continue to grow in the coming years for sure. And perhaps their growth will be connected with online gambling mainly.

Pokies? Where Does the Name Come From?


There is no historical documentation of the first usage of the term ‘pokies’, but it was the name of Australian video slots. Actually, advertisements and promos of pubs and casinos called the slots game in this way – pokies. It seems that this word origins from the video poker machines, which were available at that times in the casinos. The slots and the poker machines had the one name – pokies.


Like most slang expressions, it appeared due to people's everyday speech, when they said something like "I'm off to the club to play pokies". This term is used only in Australia while rest of the world prefers calling it slots or slot machines.