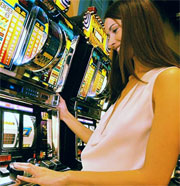 You will find thousands of pokies machines today but only few of them have reached a level where the gambling venues have multiple editions of the pokies to keep the players happy and satisfied. Everyone wants to win at slot machines. Some of the well-known pokies have re-released music and themes software, but have not been successful, because it is difficult to understand what the players will prefer. Still, there are some machines, which have not lost their popularity after many years of playing them.


Check the list of the most popular pokies in Australia! Many of them can be found in the casinos or other places in Europe and United States. Aristocrat manufactures the majority of games in Australia, however at the international level there are other casino machine manufacturers like IGT. Software for online games is developed by special companies, which try to make games as realistic as possible.

Queen of the Nile


In early 1997 the game had been launched by the name of Golden Pyramids using the Mk5 series technology by Aristocrat. Queen of Nile is one of the most common and popular games and it can be found in many online casinos. This game is based on an Egyptian theme and comes with three, nine and twenty line formats, it offers 15 bonuses. It is still in the top position, even after a decade since it has been launched.


Indian Dreaming was launched in 1999 using the 243 way Aristocrat configuration. It gives a unique playing experience as one does not need to line up the symbols to win, bacause the symbols on the adjacent reels would win. Indian Dreaming offers five, ten or twenty free games with 3 and 5 multipliers added to the feature, which increases the chance to win.

King Of The Nile


After astonishing popularity of the Queen of Nile game, Aristocrat launched King of Nile in 2002. This game is available only in twenty line format. There is an added feature to this game where the player has another chance at the end of the spins, either to take the win or play again or opt for a surprise prize.


This game reminds you about few games from the past like Mystic Eyes and Jail Bird with an added twist. If one wants to place an extra side bet, he or she can have it at the random bonus games, which include instant prize, poker machine, free spins and random reel spin.


This game looks different than the other games as it has twenty symbols are shown on the game screen instead of 15. It has groups of the top lion symbol on every reel so there is a possibility of getting the entire screen with same symbols.

Show Me The Money


In the fourth edition of Super Bucks, the Super Bucks games generally have denominations of 50 or above. This fourth edition offers the option to choose from a range of free spin options. Additional scatters while the free spins award between one and three more games.

We have 3 guests online